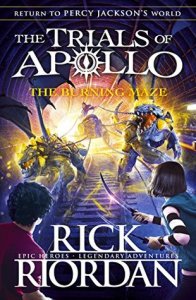 Synopsis: The formerly glorious god Apollo, cast down to earth in punishment by Zeus, is now an awkward mortal teenager named Lester Papadopoulos. In order to regain his place on Mount Olympus, Lester must restore five Oracles that have gone dark. But he has to achieve this impossible task without having any godly powers and while being duty-bound to a confounding young daughter of Demeter named Meg. Thanks a lot, Dad.
With the help of some demigod friends, Lester managed to survive his first two trials, one at Camp Half-Blood, and one in Indianapolis, where Meg received the Dark Prophecy. The words she uttered while seated on the Throne of Memory revealed that an evil triumvirate of Roman emperors plans to attack Camp Jupiter. While Leo flies ahead on Festus to warn the Roman camp, Lester and Meg must go through the Labyrinth to find the third emperor—and an Oracle who speaks in word puzzles—somewhere in the American Southwest. There is one glimmer of hope in the gloom-filled prophecy: The cloven guide alone the way does know. They will have a satyr companion, and Meg knows just who to call upon. . . .

“To Melpomene, the Muse of Tragedy,
I hope you’re pleased with yourself”

Readers be warned, spoilers to follow!
There is truly nothing negative I can come up with for this book, . The final chapters left me quite speechless. The Burning Maze has its lighter moments, sorely needed in a book like this which has a markedly darker tone to it. With the revelation of the identity of the third emperor, the best villain yet in this series, the stakes are even higher as Apollo realizes the Triumvirate’s plan for him. Several familiar faces return – Coach Hedge, Jason and Piper – as Grover, Meg and Apollo navigate the burning labyrinth to free the third oracle.

Apollo’s character development remains my favourite thing about this series, evident in the more human emotions and viewpoints he is starting to understand and experience. This book has a shock factor (not to mention completely emotional plot line) that was very much missing in Rick Riordan’s most recent books. Let’s just say that dedication at the beginning of the book was spot on. Oh, and keep a tissue box handy. Can I have the next book already?

Other reviews in this series:
Book 1: The Hidden Oracle
Book 2: The Dark Prophecy
Book 4: The Tyrant’s Tomb