Hello readers! It’s time for another round of Mini Reviews, where I talk about some of the books I don’t write full length reviews for. This installment, let’s chat about three books: American Princess: A Novel of First Daughter Alice Roosevelt, Aru Shah and the Song of Death & One Dark Throne.

Alice may be the president’s daughter, but she’s nobody’s darling. As bold as her signature color Alice Blue, the gum-chewing, cigarette-smoking, poker-playing First Daughter discovers that the only way for a woman to stand out in Washington is to make waves–oceans of them. With the canny sophistication of the savviest politician on the Hill, Alice uses her celebrity to her advantage, testing the limits of her power and the seductive thrill of political entanglements… Goodreads
I had my reservations about this book and ended up reading it solely because I’ve loved every other book of Stephanie Thornton’s that I have read – but it was such a good thing that I did! I’m always a little hesitant when venturing into new time periods and personalities in historical fiction and Alice Roosevelt is a figure I knew very little about. But the more of this book I read, the more I liked her! In comparison to the relatively reserved life that women lived in that time, Alice was anything but, challenging the rules and expectations at every step.
A woman ahead of her time, her’s was a long life fully lived, and Stephanie Thornton brings to life the irrepressible, irreverent rebel that was Alice Roosevelt in this engrossing and lively narrative. The story follows Alice from her days as First Daughter, all the way to establishing herself as the other Washington Monument. It was especially fascinating to observe eras of American history roll by through her eyes, and to see how she made herself into a political force to be reckoned with in the capital. What I particularly love about Thornton’s books is how easy it is to get emotionally invested in her characters – something especially obvious here as Alice transforms from her days as a wild young debutante through trials of relationships and devastating losses in life.
A captivating portrayal of ‘Princess Alice’, this well researched and beautifully written work is a must-read for historical fiction lovers this year!
Publishing Date: March 12th, 2019 (Berkley Books) 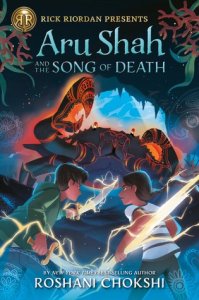 Aru is only just getting the hang of this whole Pandava thing when the Otherworld goes into full panic mode. The god of love’s bow and arrow have gone missing, and the thief isn’t playing Cupid. Instead, they’re turning people into heartless fighting-machine zombies. If that weren’t bad enough, somehow Aru gets framed as the thief. If she doesn’t find the arrow by the next full moon, she’ll be kicked out of the Otherworld. For good. But, for better or worse, she won’t be going it alone. Along with her soul-sister, Mini, Aru will team up with Brynne, an ultra-strong girl who knows more than she lets on, and Aiden, the boy who lives across the street and is also hiding plenty of secrets. Together they’ll battle demons, travel through a glittering and dangerous serpent realm, and discover that their enemy isn’t at all who they expected. … Goodreads
A huge thank you to NetGalley and Disney Book Group for providing me with an ARC of this book!
Aru and Mini are back for another adventure, this time joined by their new Pandava sister, Brynne. The god of love’s bow and arrow have been stolen, and Aru has been framed for the theft. Now the Otherworld is in a state of panic as the real thief is using said bow and arrow to turn people into zombies, creating a heartless army for nefarious purposes unknown. Aru has been given until the next full moon to retrieve the items, or she will have to leave the Otherworld forever.
Like the first book, this was definitely a fun ride. Many of these myths and legends were basically my bedtime stories growing up, and these reimaginings fascinate me more than I can describe. Add to that the ubiquitous pop culture references, characters that are so realistic, and a generous dose of humour – it turns into a book that’s very easy to relate to. With the typical fast paced adventure that I have come to expect from a Rick Riordan Presents book, this was an enjoyable read and a wonderful portrayal of friendship – a perfect middle-grade novel. I can’t wait to see what Roshani Chokshi comes up with next!
Publishing Date: April 30th, 2019 (Rick Riordan Presents)

With the unforgettable events of the Quickening behind them and the Ascension Year underway, all bets are off. Katharine, once the weak and feeble sister, is stronger than ever before. Arsinoe, after discovering the truth about her powers, must figure out how to make her secret talent work in her favor without anyone finding out. And Mirabella, the elemental sister once thought to be the certain Queen Crowned, faces attacks like never before—ones that put those around her in danger she can’t seem to prevent.
Fennbirn’s deadliest queens must confront the one thing standing in their way of the crown: each other… Goodreads
“Who knows what happened to the queens who were thrown down into the dark? Into the heart of the island, where the Goddess’s eye is always open. Who knows how she kept those queens or what she turned them into?”
Ascension Year has officially begun. Since Katherine crawled out of the Breccia Domain, she has changed. No longer the weakling, she has emerged as a strong contender and Mirabella’s supposed easy win is no longer assured. Arsinoe now knows that she is actually a Poisoner and that completely changes things for her.
Well, this was definitely a step up from Three Dark Crowns. Basically every little gripe I had about that was sorted out here and I enjoyed it so much! One Dark Throne was a roller coaster adventure. Of the three sisters, Arsinoe’s arc was my favourite. Having been told that she was the weakest, she has begun to accept it as fact herself and believes she is going to die, but her spirit is admirable. Juggling her own woes with Jules and Joseph’s turbulent relationship (honestly I just wanted to smack Joseph sometimes), and with everyone expecting her to be the first to fall, Arsinoe has a rather tough time in this book. Mirabella, I’m not quite sure why, is a character that I’ve never really liked from the beginning, and that continued in this book. She’s more or less in the same place character wise and vacillates rather irritatingly between wanting to kill her sisters for the crown and hesitating to hurt them. And Katherine – her arc has turned quite eerie now, and she has the most interesting POV. The meek girl is definitely gone and this new Katherine has her eyes on the crown and isn’t about to let anyone stop her.
We finally get some more of that world-building I so wanted in the previous book and explanations about the war gift. Some rather unexpected characters emerge into prominence – Billy for one: I never expected him to turn into a character I would find myself rooting for!
This is turning into a truly exceptional and riveting series, and I can’t remember the last time when the main characters were both the heroes and villains of their own tale. With a significant increase in the pacing of the story (finally!), One Dark Throne does a fine job developing the storylines of not only the three queens, but those closest to them as they struggle to make sure their own queen takes the throne. And that ending – this is the kind of book that is so intense, you need to take a break after reading it. Now this is how you do a sequel!
Publishing Date: September 19th, 2017 (HarperTeen)

Have you read any of these books or do you plan to? I’d love to hear your thoughts on them!