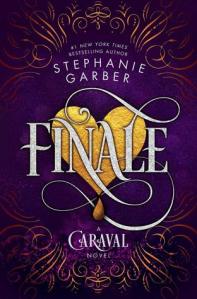 Synopsis: Welcome, welcome to Caraval…all games must come to an end.
It’s been two months since the last Caraval concluded, two months since the Fates have been freed from an enchanted deck of cards, two months since Tella has seen Legend, and two months since Legend claimed the empire’s throne as his own. Now, Legend is preparing for his official coronation and Tella is determined to stop it. She believes her own mother, who still remains in an enchanted sleep, is the rightful heir to the throne.
Meanwhile, Scarlett has started a game of her own. She’s challenged Julian and her former fiancé, Count Nicolas d’Arcy, to a competition where the winner will receive her hand in marriage. Finaly, Scarlett feels as if she is in complete control over her life and future. She is unaware that her mother’s past has put her in the greatest danger of all.
Caraval is over, but perhaps the greatest game of all has begun―with lives, empires, and hearts all at stake. There are no spectators this time: only those who will win…and those who will lose everything. . .

Narrated from both Scarlett and Tella’s POVs, Finale is nothing short of a roller coaster. Two months have passed since the Fates were freed from the Deck of Destiny and the countdown to Legend’s coronation has begun. Tella, having won Caraval, is owed a prize from Legend, one she is refusing to claim after his shocking move at the end of Legendary. Tella is determined to stop his coronation, but Legend has bigger things on his mind – the Fates draw closer to waking each day, and when they do, they will come for their powers and wreak havoc on the Empire.

As with the previous books, I rather enjoyed the flowery writing style and extensive world building. Scarlett was more tolerable in this book, atleast once her ridiculous game was out of the way. The truth of Scarlett’s past and everything related to it was by far the most intriguing reveal. Tella’s character, interestingly enough, shifted a little towards what Scarlett’s earlier persona was like, as she and Legend basically have a ‘will they, won’t they’ throughout the book alongside, you know, saving the world. It was especially nice how each sister had their own mission to complete, unlike the previous books, where one of them more or less faded into the background. The Fates, the ones we got to see atleast, were fascinating characters and well thought out. The story of Paradise the Lost was also very interesting and answers some major questions regarding Scarlett and Tella’s mother.

Finale was really heavy on the myth and lore aspect, but was missing the one thing I enjoy the most about this series – that distinctive Caraval magic. Rating this book is more than a little difficult. While it was definitely more complex than the first two books with a well put together storyline, I felt like there were many plot points that sort of fizzled out, or did not really have the conclusion that was suitable for the build up, and still so many unanswered questions. The best example (mild spoiler) would be the introduction of Count Nicolas D’Arcy – I thought he was going to be a significant character in Finale, but before half the book was done, he was out of the picture, making Scarlett’s whole scheme completely irrelevant. For storylines that felt unresolved, Jacks is basically at the top of my list. I actually started liking the Prince of Hearts’ character and he lent some (twisted) humour to an otherwise serious book. I would have really liked a clearer ending for him.

Although it was well written, I think Finale went a little overboard with the romance and drama. I mean, we all want to see more of Tella and Legend, but it was to the extent that it detracted from the plot (Legend is still my favourite character though). The plotline regarding the Fates, as in Legendary, was interesting, but weak, especially considering that the character that was for all intents and purposes, the main villain of the series, was only introduced partway through the book. As a reader, I need time to get to know the villains of a story as much as the heroes, and there wasn’t as much impact for a character introduced so late in the story. As for the ending, it’s hard to say without giving things away, but it felt like it was resolved too fast and too easily – anticlimactic would be best word to describe it, especially with that twist that amounted to a deus ex machina in my opinion (a plot device I really, really dislike).

Overall, Finale was a bit of a let down after Caraval and Legendary, but as far as the central plot goes and our four main characters, everything was tied up rather nicely. I did like the epilogue, especially Tella’s letter to Legend and I definitely have my fingers crossed for another adventure set in this world.