A future chieftain
Fie abides by one rule: look after your own. Her Crow caste of undertakers and mercy-killers takes more abuse than coin, but when they’re called to collect royal dead, she’s hoping they’ll find the payout of a lifetime.
A fugitive prince
When Crown Prince Jasimir turns out to have faked his death, Fie’s ready to cut her losses—and perhaps his throat. But he offers a wager that she can’t refuse: protect him from a ruthless queen, and he’ll protect the Crows when he reigns.
A too-cunning bodyguard
Hawk warrior Tavin has always put Jas’s life before his, magically assuming the prince’s appearance and shadowing his every step. But what happens when Tavin begins to want something to call his own?

This was a very interesting read and definitely a unique one. I can’t wait for the sequel!
Read my full review here.

A net of shadows begins to tighten around the Shadowhunters of the London Institute. Mortmain plans to use his Infernal Devices, an army of pitiless automatons, to destroy the Shadowhunters. He needs only one last item to complete his plan: he needs Tessa Gray.
Charlotte Branwell, head of the London Institute, is desperate to find Mortmain before he strikes. But when Mortmain abducts Tessa, the boys who lay equal claim to her heart, Jem and Will, will do anything to save her. For though Tessa and Jem are now engaged, Will is as much in love with her as ever.
As those who love Tessa rally to rescue her from Mortmain’s clutches, Tessa realizes that the only person who can save her is herself. But can a single girl, even one who can command the power of angels, face down an entire army?
Danger and betrayal, secrets and enchantment, and the tangled threads of love and loss intertwine as the Shadowhunters are pushed to the very brink of destruction in the breathtaking conclusion to the Infernal Devices trilogy. 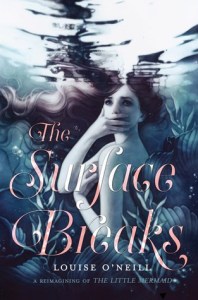 A dark and beautiful reimagining of The Little Mermaid.
Deep beneath the sea, off the cold Irish coast, Gaia is a young mermaid who dreams of freedom from her controlling father. On her first swim to the surface, she is drawn towards a human boy. She longs to join his carefree world, but how much will she have to sacrifice? What will it take for the little mermaid to find her voice? Hans Christian Andersen’s original fairy tale is reimagined through a searing feminist lens, with the stunning, scalpel-sharp writing and world building that has won Louise her legions of devoted fans in the UK. A book with the darkest of undercurrents, full of rage and rallying cries: storytelling at its most spellbinding.

A criminal mastermind and unrivaled pilot, Ia has spent her life terrorizing the Olympus Commonwealth, the imperialist nation that destroyed her home. When the Commonwealth captures her and her true identity is exposed, they see Ia’s age and talent as an opportunity: by forcing her to serve them, they will prove that no one is beyond their control.

Soon, Ia is trapped at the Commonwealth’s military academy, desperately plotting her escape. But new acquaintances—including Brinn, a seemingly average student with a closely-held secret, and their charming Flight Master, Knives—cause Ia to question her own alliances. Can she find a way to escape the Commonwealth’s clutches before these bonds deepen?