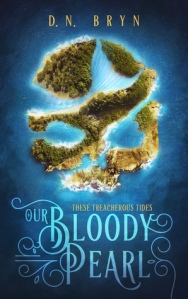 Synopsis: The ocean is uncontrollable and dangerous. But to the sirens who swim the warm island waters, it’s a home more than worth protecting from the humans and their steam-propelled ships. Between their hypnotic voices and the strength of their powerful tails, sirens have little to fear.

That is, until the ruthless pirate captain, Kian, creates a device to cancel out their songs.

Perle was the first siren captured, and while all since have either been sold or killed, Kian still keeps them prisoner. Though their song is muted and their tail paralyzed, Perle’s hope for escape rekindles as another pirating vessel seizes Kian’s ship. This new captain seems different, with his brilliant smile and his promises that Kian will never again be Perle’s master. But he’s still a human, and a captor in his own way. The compassion he and his rag-tag human family show can’t be sincere… or can it?

Soon it becomes clear that Kian will hunt Perle relentlessly, taking down any siren in her path. As the tides turn, Perle must decide whether to run from Kian forever, or ride the forming wave into battle, hoping their newfound human companions will fight with them.

Review:
Thank you to the author for providing me with a copy of this book in exchange for an honest review.

Our Bloody Pearl follows the story of Perle, a siren who has been held in captivity by the cruel pirate captain Kian ever since she created a device to block out the sirens’ singing. However, when the ship is unexpectedly captured by another pirate captain, Dejean, who unlike every other human they have come across, is kind to them. But even as they grow to trust their new human companions, Kian is on the hunt, determined to get Perle back at any cost, and Perle must decide whether to stand and fight or flee into the ocean to continue to hide from her.

Starting this book, I was expecting something along the lines of Daughter of the Siren Queen, which I read earlier this year. However, Our Bloody Pearl, despite a number of pirates involved, was more focussed on sirens themselves rather than pirate adventure, and I liked it all the more for that. These sirens, with their rather violent natures, are more akin to those from greek mythology. As this book is entirely told from Perle’s POV, we see the human world through their eyes and I found it quite fascinating that some things that are considered common for humans for example, gender, are completely novel or irrelevant to sirens.

As a whole, the pacing of Our Bloody Pearl is on the slower side which allows for some great character development, particularly for Perle as she learns to trust her new human companions and sees that not all humans are the same. Dejean, though he is a pirate, is very unlike the typical characterizations of one, and despite his bad history with sirens is still compassionate towards Perle and tries his best to help them. I really enjoyed how Perle and Dejean figure out a way to communicate using sign language.

One thing I felt would have been useful was a little more world-building on the human side of things. The world of sirens and their way of life is very well described in this book, and hopefully the sequel will expand on this other aspect. Also, Kian was an excellent villain, but I felt she would have had a better effect had she had more of a direct presence in the story rather than in Perle’s nightmares alone.

This was one of the most unique books I’ve read this year and I’m looking forward to the sequel. It will be quite interesting to see how the story goes forward and who the new antagonist will be. Overall, this was an enjoyable read, and I would definitely recommend it.

Have you read this book? Let me know in the comments below!