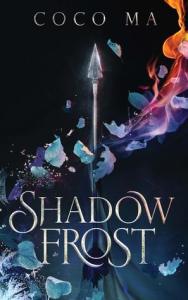 Synopsis: When Asterin Faelenhart, Princess of Axaria and heir to the throne, discovers that she may hold the key to defeating the mysterious demon terrorizing her kingdom, she vows not to rest until the beast is slain. With the help of her friends and the powers she wields — though has yet to fully understand — Asterin sets out to complete a single task. The task that countless, trained soldiers have failed. To kill it.

But as they hunt for the demon, they unearth a plot to assassinate the Princess herself instead. Asterin and her companions begin to wonder how much of their lives have been lies, especially when they realize that the center of the web of deceit might very well be themselves. With no one else to turn to, they are forced to decide just how much they are willing to sacrifice to protect the only world they have ever known.

That is, of course… if the demon doesn’t get to them first.

Review:
Thank you to the publisher, Blackstone Publishing, and Edelweiss for providing me with an eARC of this book in exchange for an honest review.

A mysterious demon has been terrorizing the kingdom of Axaria, and after several unsuccessful attempts to subdue it, Princess Asterin is unwilling to risk anyone else. She sets out with a set of trusted companions to kill it herself. But as their hunt progresses, they begin to realize there is far more at play than meets the eye – starting with an assassination attempt on the Princess herself.

Asterin was the typical warrior princess, headstrong and quite reckless, but her arc was a lot of fun to follow. I loved her training scenes with Quinlan and how she learned to use her powers without the affinity stones. She is well balanced by the other characters Shadow Frost focuses on, and the different POVs are really well written. Each character has their own backstory that unfolds throughout the course of the book and helped me as a reader connect to these characters – something I’ve been having trouble with in my recent reads. Apart from that, it had some pretty great plot twists, which were really hard to predict. Shadow Frost, at times, reminded me a little of Throne of Glass, especially in the cast of characters. The world building and setting of the novel is also quite good, and I’m looking forward to learning more about both, along with the Immortals, who are still a bit of a mystery, in the sequel.

The main downside I felt, was the pacing. The first half moved rather slowly with quite a lot of information that would have been better spaced out, and the ending was nothing short of chaotic. I needed to re-read those couple of chapters to figure out what happened. I was also really disappointed at the choice Asterin makes towards the end of the book, and Luna’s reaction was entirely justified. I nearly dropped my rating a half star, but I really did like the elemental magic so I’m leaving it at 4 stars.

Overall, Shadow Frost has a unique magic system and plot, along with some really interesting characters. The adventure is just beginning and I’m curious to see where these characters will go next, particularly Luna, as she discovers more of her past. It was an entertaining and well written read, even more impressive considering that the author first wrote this at fifteen. Definitely recommended!