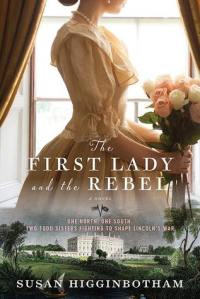 Synopsis: The story of Mary Todd Lincoln and Emily Todd Helm, two sisters on separate sides of history, fighting for the country they believe in against the people they love most.

When the Civil War cracks the country in two, First Lady Mary Todd Lincoln watches from the White House as the blows of a divided nation shake her people and her husband, President Lincoln, to their very core. As the news of wartime enter the Oval Office, Mary waits with bated breath, both for the hopes of a Northern victory as well as in distress of a bloody Southern defeat.

Mary, like many people during this time, have a family that is torn between North and South. her beloved sister Emily is across party lines, fighting for the Confederates, and Mary is at risk of losing both the country she loves and the family she has had to abandon in the tides of this brutal war.

Review:
Thank you to the publisher, Sourcebooks Landmark, and NetGalley for providing me with an eARC of this book in exchange for an honest review.

The First Lady and the Rebel is narrated from the perspectives of two sisters on opposing sides of the unfolding American Civil War as their family is divided by politics – First Lady Mary Lincoln and her sister Emily Helm, who was married to the confederate general Hardin Helm.

This was my first historical fiction read set during the Civil War and as such, my background knowledge regarding the events during this time period was limited to the basic facts. To date, most of my historical fiction picks have usually been ones set in Europe, but after reading Stephanie Thornton’s American Princess earlier this year, and now this book, I’m rather curious to expand my search for books in this genre to American history.

This book has an excellent premise, if somewhat lacking in execution. It also provided an intriguing glimpse into early American politics as Lincoln rises from the Illinois House of Representatives to the White House. This book is definitely on the heavier side, but it was interesting to see both sides of the story, from the struggles the Lincolns had to face in the early years to what it might have been like for those fighting for the Confederacy.

Though I enjoyed the story itself, I found it very hard to sympathize, much less connect, with either of the main characters – neither Mary nor Emily. Neither really developed any notable personality throughout the book. In fact, the sisters were more like bystanders to their own stories, as they never seem to really say or do anything that affects events at all. In fact, they seem very detached from the terrible events happening around them – the sole exception being Willie Lincoln’s death, where I thought the effect it had on Mary how she handled her grief was very well portrayed.

Additionally, the pacing, I felt, was extremely erratic. Some of the most notable moments are barely given a couple of pages, while others, like, dinner parties and gatherings are given too much detail, especially considering that this is a country at war. It simply dragged on and on – this book is 400 pages long, and it felt much longer. The time skips certainly did not help, and the same goes for the narration changes between chapters – events that are mentioned as having taken place in one chapter are played out in the next from the perspective of the other sister, which confused me quite a bit with regards to the timeline.

While somewhat lacking in presentation, it is evident how much research has gone into this novel, one thing I adore about Susan Higginbotham’s works, and her attention to detail is what keeps me coming back to these books. The First Lady and the Rebel was nonetheless a fascinating read and a unique perspective to read about the events of this time from. Definitely recommended for historical fiction fans!

The First Lady and the Rebel releases on October 1st, 2019.