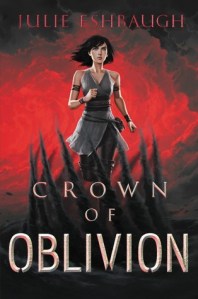 Synopsis: Astrid is the surrogate for Princess Renya, which means she bears the physical punishment if Renya steps out of line. Astrid has no choice—she and her family are Outsiders, the lower class of people without magic and without citizenship.

But there is a way out of this life—competing in the deadly Race of Oblivion. To enter the race, an Outsider is administered the drug Oblivion, which wipes their memory clear of their past as they enter a new world with nothing to help them but a slip of paper bearing their name and the first clue. It’s not as simple as solving a puzzle, however—for a majority of the contestants, the race ends in death. But winning would mean not only freedom for Astrid, but citizenship and health care for her entire family. With a dying father to think of, Astrid is desperate to prevail.

From the beginning, the race is filled with twists and turns. One of them is Darius, a fellow racer Astrid meets but isn’t sure she can trust. Though they team up in the race, as Astrid’s memories begin to resurface, she remembers just who he was to her—a scorned foe who may want revenge. Astrid also starts to notice she has powers no Outsider should—which could help her win the race, but also make her a target if anyone finds out. With stakes that couldn’t be higher, Astrid must decide what is more important: risking her life to remember the mysteries of the past, or playing a cutthroat game in order to win her—and her family’s—freedom.

Review:
Thank you to the publisher, HarperCollins, and Edelweiss for providing me with an eARC of this book in exchange for an honest review.

Astrid is an Outsider, a class of people in Lanoria who do not hold citizenship or have access to magic, and serve the citizens as indentured servants. As a surrogate to the Princess, Astrid bears the punishment for any of her misdemeanours. There is one way out however – the deadly race of Oblivion, which grants the winner and their family citizenships and full rights. Circumstances lead to Astrid signing up for the race, and with her memory wiped clean by the drug Oblivion, she must make her way through the deadly race, all the while trying to figure out her past, and more importantly, why she has abilities – magic – that no Outsider should have, something that, if known to others, would get her arrested before she can win.

The magic system in this book was really unique and interesting. However, it is left up to the reader to puzzle out the specifics and its boundaries and there is no concrete explanation ever given. As such a large part of the book is Astrid making her way through the various challenges of the race with an ability that she, as an Outsider, is not supposed to have, this got confusing really fast. The same goes for the world-building – with so much focus on the race throughout the book, the various side plots and groups of characters along with the political tensions felt very vague, and as a result, made it hard to connect to any of the characters other than the two protagonists. The memory loss was an interesting addition and made the race much more exciting, especially once Astrid found out that her brother was also in the race and didn’t know who he was.

There were times when I got a slight Hunger Games vibe from this book, but the one thought that was recurring was the lack of urgency in the plot. If this is a race where only the person who finishes first wins, how is it they have the time to dawdle around so much? Also, what kind of monitoring were the racers under? There are mentions of reporters taking pictures, and news of the race appearing in the papers, but Astrid being able to board a train unseen and basically vanish for a night to an underground city pushes the boundaries of credibility, especially considering this race is taking place not on a course or world specially built for it, but in the same land, among people going about their everyday lives (let’s not even get into how many laws the racers must be breaking and how no one says a word about any of it).

Overall, I would say that the main reason my rating is lowered for this book was the lacklustre world-building and several plot holes that didn’t make much sense from any angle. However, I did enjoy Astrid’s character arc as she struggled to decide who she could trust due to her memory being wiped by the drug. The ending for Crown of Oblivion was very abrupt, and I’ve seen in a few places that this is a standalone – I hope it’s not, because there is so much left unresolved and effectively renders multiple plot lines pointless. Nevertheless, it was a semi-happy ending to a fast paced and exciting read that Hunger Games fans will probably enjoy.