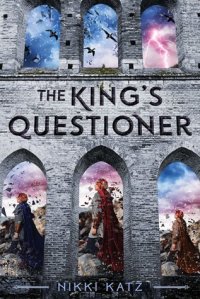 Synopsis: Kalen has been cursed with a gift: he’s a mental picklock, able to access a person’s memories and secrets by touch. His skills make him the perfect questioner to the king, and he spends his days interrogating prisoners of the crown.

But when Kalen’s estranged childhood friend, Prince Cirrus, falls into a sudden coma, the king begs Kalen to intervene. By accessing Cirrus’ mind, Kalen saves his life—and uncovers a terrifying secret. The prince has a sister, banished long ago, and she is the key to the destruction or survival of the kingdom.

With the help of Cirrus and a silver-haired thief named Luna, Kalen must find the princess and bring her home. Or risk death at the hands of his king.

Review:
Thank you to the publisher, Swoon Reads, and Edelweiss for providing me with an eARC of this book in exchange for an honest review.

Kalen, who has the gift of seeing people’s memory with a single touch, is the King’s Questioner, and assists in interrogating prisoners for the King. But when Prince Cirrus falls into a coma one day and Kalen goes into his mind to wake him, he comes across a long buried memory that hides a terrible secret – the prince has a sister, who was sent away due to her terrifying gift. A sister, who was prophesied to be either the survival or destruction of the kingdom. And with unrest against the crown rising in the city, Kalen must now set off on a quest with his once-friend, Prince Cirrus, to bring home the princess.

This plot had so much potential, and yet, the execution was almost too simplistic and didn’t take the chance to expand the plot in any way. There was nothing particularly wrong with any of it – the characters were solid enough, and the world-building was off to a pretty good start too. This book just needed more – a little more suspense, complexity, and definitely a good bit longer too. I would have liked to know more about the sorciers and the nature of their abilities, and why only some people are born with these powers. The characters would have benefitted from a little more development and depth as there was barely enough time to properly figure any of them out. Plotwise, things seem to happen very easily for our characters, and it all goes mostly according to plan, which seems a little unrealistic. The ending is rather rushed, but does leave room for future sequels.

Overall, this is not a bad read, just one with a very simple plot and not too many layers to the story. And with the kind of books I usually read, especially in fantasy, I like trying to figure out complex plots and cliffhangers which were all missing here. Still, The King’s Questioner has a good concept and writing style and is a pretty light and easy read too!