Hello readers! It’s time for another round of Mini Reviews, where I talk about some of the books I don’t write full length reviews for. This installment, I’m doing three as opposed to my usual four since these are a little longer than usual, so let’s chat about: We Unleash the Merciless Storm, Blood Countess, and Scavenge the Stars. 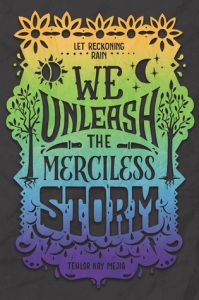 In this nail-biting sequel to Tehlor Kay Mejia’s critically acclaimed fantasy novel We Set the Dark on Fire, La Voz operative Carmen is forced to choose between the girl she loves and the success of the rebellion she’s devoted her life to.

Being a part of the resistance group La Voz is an act of devotion and desperation. On the other side of Medio’s border wall, the oppressed class fights for freedom and liberty, sacrificing what little they have to become defenders of the cause.

Carmen Santos is one of La Voz’s best soldiers, taken in when she was an orphaned child and trained to be a cunning spy. She spent years undercover at the Medio School for Girls, but now, with her identity exposed and the island on the brink of civil war, Carmen returns to the only real home she’s ever known: La Voz’s headquarters.

There she must reckon with her beloved leader, who is under the influence of an aggressive new recruit, and with the devastating news that her true love might be the target of an assassination plot. Will Carmen break with her community and save the girl who stole her heart—or fully embrace the ruthless rebel she was always meant to be? Goodreads

Thank you to the publisher, HarperCollins, and Edelweiss for providing me with an eARC of this book in exchange for an honest review.

Carmen has returned to La Voz headquarters, but it is no longer the home she remembers. Much has changed in the years she has been away, under the influence of Ari, a new recruit, the commitment of La Voz to protecting its own has unexplainably waned, as evidenced by the recent rash missions Carmen witnessed herself during her time undercover as the Garcia Segunda. What’s more, the leadership is reluctant to rescue Dani and sees her as a potential leak who might need to be silenced before she can reveal anything damaging. Torn between her loyalty to La Voz and saving Dani, Carmen has a difficult choice to make.

Unleash the Merciless Storm is way better than its predecessor. This sequel also takes us out of the capital into the world of Medio beyond the walls and into the heart of the revolution and a lot in between. Many things that I didn’t like much in the last book were improved so much here, chiefly that I felt much more connected to the main characters, and I particularly loved Carmen’s arc. Her daring, if ill-planned (and with awful consequences), mission to rescue Dani was something I enjoyed very much as I was quite impatient to see them reunited after the shocking ending of We Set the Dark on Fire.

While it was great to get a glimpse inside La Voz, I found it hard to be invested in the politics of the rebellion since really, a lot of these characters were new and I didn’t know or particularly care about most of them. As a result, the part with Carmen trying to settle back into routine and attempting to establish herself in the rebellion in her old rank once more was a portion of the book I found rather boring.

I was really excited to get Carmen’s POV, but I didn’t like that the book was entirely from her perspective. The changeover is very jarring, since the first book was all Dani and now we barely get to see anything of her for a good portion of the book. That, and when you really take a look back at this book, Dani is more of a supporting role here – whereas in my opinion, a dual POV would have been a much better choice, giving us a look at what is happening inside the capital with some real character development for Dani which I felt was rather lacking in the previous book.

Overall, a solid read, even if the ending was not as decisive as I would have liked and the climax was rather rushed. I’m quite sad to say goodbye to Carmen and Dani and would love to see another book set in this world to tie up some of the major loose ends. 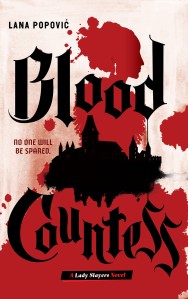 In 16th century Hungary, Anna Darvulia has just begun working as a scullery maid for the young and glamorous Countess Elizabeth Báthory. When Elizabeth takes a liking to Anna, she’s vaulted to the dream role of chambermaid, a far cry from the filthy servants’ quarters below. She receives wages generous enough to provide for her family, and the Countess begins to groom Anna as her friend and confidante. It’s not long before Anna falls completely under the Countess’s spell—and the Countess takes full advantage. Isolated from her former friends, family, and fiancé, Anna realizes she’s not a friend but a prisoner of the increasingly cruel Elizabeth. Then come the murders, and Anna knows it’s only a matter of time before the Blood Countess turns on her, too. Goodreads

Well, this was an interesting read, and I enjoyed it far more than I expected for a book in a genre I have never touched before, and it was surprisingly violent for a YA title. This was my first time reading a book by this author, and also my first book about Countess Elizabeth Bathory, though I am somewhat familiar with what history says about her.

However, Blood Countess turned out to be only an ‘okay’ read for me overall. In terms of setting and atmosphere, this book did a great job and everything felt very authentic and time period appropriate. The Countess’ portrayal was appropriately horrifying, pretty much exactly what I was expecting as was her masterful psychological manipulations of Anna. Anna’s willful blindness on the other hand, becomes extremely annoying very quickly, especially since she started off as such a strong and independent personality and then seems to do a 180 into an unbelievably meek version of herself, knowingly allowing herself to be manipulated and swayed into doing horrible things that she would’ve never dreamed of, never mind that it was the lesser of two evils. It takes her entirely too long to break away.

Another thing I did not enjoy was the pacing. The initial three quarters of the book gets progressively slower and the story seemed to be going nowhere and then suddenly things just pick up and the book is over. That and the ending was not nearly as exciting as I thought it might turn out to be. There was a feeling throughout of something big about to occur that never ended up happening.

Blood Countess was certainly an intriguing read, even if it did have its downsides, and I’m looking forward to seeing what is next in this series.

When Amaya rescues a mysterious stranger from drowning, she fears her rash actions have earned her a longer sentence on the debtor ship where she’s been held captive for years. Instead, the man she saved offers her unimaginable riches and a new identity, setting Amaya on a perilous course through the coastal city-state of Moray, where old-world opulence and desperate gamblers collide.

Amaya wants one thing: revenge against the man who ruined her family and stole the life she once had. But the more entangled she becomes in this game of deception—and as her path intertwines with the son of the man she’s plotting to bring down—the more she uncovers about the truth of her past. And the more she realizes she must trust no one… Goodreads

It has been well over a decade since I last read The Count of Monte Cristo, and I remember only the faintest outline of the plot – definitely time for a reread. But like it, Scavenge the Stars too, is a tale of revenge and how far our main character Amaya is willing to go for it. Retellings this year are turning out to be pretty good!

Scavenge the Stars has an excellent cast of characters from the formerly drunken wastrel heir Cayo Mercado, attempting to redeem himself as his family is struck by hardship, the mysterious Boon who is out for revenge against those who made him Landless, to Amaya herself, made bitter by years of enduring cruelty aboard the debtor ship, now only seeking revenge against the one responsible, Captain Zharo. With an intricately woven plot, it was a delight to see this story unravel piece by piece, and the author does a wonderful job and keeping the air of mystery throughout, never revealing all the details at once.

There are points in the story where there is so much going on it’s hard to keep things straight, and all the twists in the tale, though delightful, don’t help much in this aspect. The world building could definitely use some work. There are mentions of so many places, countries and cultures, but nothing is ever defined in more detail and everything ends up feeling extremely generic when, in fact, there are some very important political implications of some events that occur in this story. The book doesn’t bother to expand even Moray, where the story takes place, beyond the specific areas that the plot touches. However, what annoyed me the most was the multiple timelines and it was extremely confusing when something happens in one chapter and in the next people are planning it out. Add to that the dual narrative, and it just took a large chunk of enjoyment out of the tale for me since I always prefer a more linear storytelling technique.

Overall, a pretty good read, and one I would recommend. I loved how complex and well written this book was, and I’m really looking forward to the sequel to see where this story goes next.

Have you read any of these books or do you plan to? I’d love to hear your thoughts on them!