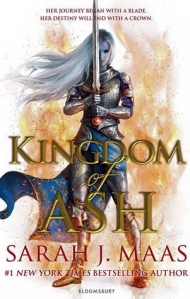 Synopsis: Years in the making, Sarah J. Maas’s #1 New York Times bestselling Throne of Glass series draws to an epic, unforgettable conclusion. Aelin Galathynius’s journey from slave to king’s assassin to the queen of a once-great kingdom reaches its heart-rending finale as war erupts across her world. . .
Aelin has risked everything to save her people―but at a tremendous cost. Locked within an iron coffin by the Queen of the Fae, Aelin must draw upon her fiery will as she endures months of torture. Aware that yielding to Maeve will doom those she loves keeps her from breaking, though her resolve begins to unravel with each passing day…
With Aelin captured, Aedion and Lysandra remain the last line of defense to protect Terrasen from utter destruction. Yet they soon realize that the many allies they’ve gathered to battle Erawan’s hordes might not be enough to save them. Scattered across the continent and racing against time, Chaol, Manon, and Dorian are forced to forge their own paths to meet their fates. Hanging in the balance is any hope of salvation―and a better world.
And across the sea, his companions unwavering beside him, Rowan hunts to find his captured wife and queen―before she is lost to him forever.
As the threads of fate weave together at last, all must fight, if they are to have a chance at a future. Some bonds will grow even deeper, while others will be severed forever in the explosive final chapter of the Throne of Glass series.

Review:
Note: This review is an updated version of the original posted on this blog in November 2018, which can be found here.

“Still she pressed her hand to her chest, feeling the heart thundering beneath, feeling the dust of every road she had traveled these ten years to return here. For this moment. For this purpose. So she whispered it to herself, one last time. The story. Her story.
Once upon a time, in a land long since burned to ash, there lived a
young princess who loved her kingdom…”

I’ve finally finished my Throne of Glass series reread, and it was so much better on this second read! And this book in particular is just as amazing as I remember it, maybe even better. Perfection. Utter perfection. This was one of two most anticipated books of 2018 for me (the other being Cassandra Clare’s Queen of Air and Darkness), and it most definitely did not disappoint. Kingdom of Ash was well worth the wait, and definitely worth the time it took to read too. Sarah J. Maas has a knack for absolutely epic conclusions, and I have never loved the final book in a series as much as this one.

I started Throne of Glass quite late, only after Queen of Shadows was released, but in the span of seven books, I’ve become more emotionally invested than I realized in the fate of these characters I’ve come to know so well – and that’s even before getting into the plotline! This was by far, the most intense read I can remember in recent years (and that is including A Court of Wings and Ruin last year). Although Tower of Dawn delayed this masterpiece by a whole year, it was still a great read, and to get the full effect of this book, it’s best to read that first. Now then, doing my utmost to keep the spoilers minimal, here are some of my thoughts on Kingdom of Ash.

As we know from the end of Empire of Storms, Aelin is held captive by Maeve and tortured for the location of the two Wyrdkeys. Rowan, accompanied by Gavriel, Elide and Lorcan, desperately searches for her across Erilea and beyond. Meanwhile, Aedion and Lysandra are in Terrasen with the Bane, playing a risky game of hiding Aelin’s absence as Morath’s armies are practically on their doorstep. Chaol, with Yrene at his side, is on his way back home, accompanied by the khagan’s armies. New information about the ongoing war however, leads Chaol to turn his steps toward the family home he has long since left behind, Anielle.

And lastly, my personal favourite – Manon and Dorian. With the two Wyrdkeys in hand, the duo, accompanied by the Thirteen, are seeking the third and final key. With all these different threads, at times diverging and at others overlapping, it is hard to keep track of who is where, but that just adds to the unpredictability of the journey (predictable storylines are a common complaint I have with books). Every twist and turn, every cliffhanger and every reveal is all the more marvellous for it.

“Even if this fractured darkness now dwelled within her, even if speech was difficult, she would show them what they wished to see.
An unbroken Fire-Bringer. Aelin of the Wildfire.
She would show the world that lie as well. Make them believe it.
Maybe she’d one day believe it, too.”

The months of Aelin’s imprisonment, while much of it takes place off-page and is implied, enough of it is described – in graphic detail – in the opening chapters of Kingdom of Ash that are definitely not for the faint of heart. Aelin’s unbreakable willpower is being sorely tested, and only the thought of Terrasen and her friends keeps her going.

Fenrys and Aelin forge a silent bond in this time, each helping the other endure the different kind of tortures they are being put through. I found the resolution of this arc of the story to be particularly satisfying. The emotional aftermath and understandable trauma for both of them is so well portrayed. Aelin is not invincible, she is finally reaching her breaking point as well, and it is very evident in several conversations she and Rowan share throughout the rest of the book. She tries her best to be what Terrasen needs, all the while haunted by the thought of the final sacrifice she might have to make.

“Be the bridge, be the light. When iron melts, when flowers spring from fields of blood—let the land be witness, and return home …
… And far away, across the snow-covered mountains, on a barren plain before the ruins of a once-great city, a flower began to bloom.”

Manon’s arc is one I have followed with great interest ever since Heir of Fire, and Kingdom of Ash is the best of them all. Along with Dorian and the Thirteen, Manon is on a mission to rally the Crochans to war – witches who are, understandably, more than a little reluctant to trust or follow her despite her half-Crochan heritage. P.S. I’m still not over Chapter 89. I had to sit back and take a break after that one.

Dorian meanwhile, plots the seemingly impossible. The revelation that his father was possessed by the Valg, not to mention his own time under possession, both weigh heavily on his mind even as he plans to go after the third Wyrdkey alone, pushing his magic beyond anything he has done before. The burden that is Aelin’s is equally Dorian’s as well, and ever looms large in his thoughts. His POVs were frankly, a delight to read. Without giving away anything, it is so very evident how far Dorian has come from Throne of Glass. I was practically cheering during the Morath scenes.

Yrene…now there was a surprise. Following Tower of Dawn, I knew that her particular skill set was going to be crucial, but I did not expect her to be as prominent as she was either. Yrene is the character we have known for the least amount of time, yet in the two books she is present in (three if you count The Assassin’s Blade), she’s turned into such a strong character.

This is barely scratching the surface of Kingdom of Ash, as there is no character who does not play a significant part in my opinion and I could give my thoughts on this book for days. Unsurprisingly, in a book where the stakes are so high, the overall tone is rather serious. Yet, there are bits and pieces of humour and light-heartedness in unexpected places: Dorian and Manon’s POVs of course, Aelin’s sassy comebacks and that unexpected little crossover as well! The battles were as amazing as I expected with extravagant displays of power all around. I have to say, I particularly loved the fact that the final battle was not just all about Aelin, but on several different fronts at once.

Some might be daunted by the size of this book – just under a 1000 pages – and with the amount of content, it could have easily been split into two books (good thing it wasn’t though – I couldn’t have taken any more of a wait) , but it never felt like the story was dragging on at any part. The plot line flowed effortlessly between the various characters at different ends of the continent, caught up in their own missions.

One thing I was really afraid of for this book was that there was simply so much story left to tell, so many loose ends to tie up – and that some of my favourite characters might end up getting lesser page time than I hoped. Well, that is one thing I am glad to say did not happen. All the main characters (and a few beyond) received their fair share, and with the amount of things happening in each chapter, Maas has done an excellent job balancing the various plot lines throughout the book, building up the tension bit by bit for nearly three-quarters of the book, before finally bringing them all together in one epic final battle.

“Burning bright, burning undaunted. A vision of old, reborn once more. The cry went down the castle battlements, through the city,
along the walls. The queen had come home at last.
The queen had come to hold the gate.”

All I can say is thank you, Sarah J Maas, for this amazing conclusion to Aelin’s journey. This is a series that is going to stay with me for a long, long time to come.