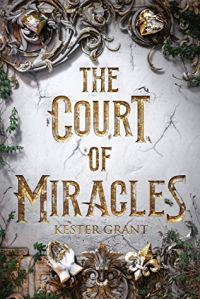 Synopsis: In the violent urban jungle of an alternate 1828 Paris, the French Revolution has failed and the city is divided between merciless royalty and nine underworld criminal guilds, known as the Court of Miracles. Eponine (Nina) Thénardier is a talented cat burglar and member of the Thieves Guild. Nina’s life is midnight robberies, avoiding her father’s fists, and watching over her naïve adopted sister, Cosette (Ettie).

When Ettie attracts the eye of the Tiger – the ruthless lord of the Guild of Flesh – Nina is caught in a desperate race to keep the younger girl safe. Her vow takes her from the city’s dark underbelly to the glittering court of Louis XVII. And it also forces Nina to make a terrible choice – protect Ettie and set off a brutal war between the guilds, or forever lose her sister to the Tiger.

Les Misérables meets Six of Crows in this page-turning adventure as a young thief finds herself going head to head with leaders of Paris’s criminal underground in the wake of the French Revolution.

Il était une fois…in a world where the French revolution failed and the instigators were made a harsh example of, Paris is now split between the royalty, who are more ruthless than ever and the nine criminal underworld guilds who form the Court of Miracles which runs on its own law. Éponine ‘Nina’ Thenardier joins the Guild of Thieves to escape her violent father and eventually becomes the Black Cat, one of the most skilled thieves in the guild. When her adopted younger sister Cosette catches the eye of the Tiger, the lord of the Guild of Flesh, Nina is determined to do whatever it takes to protect her, refusing to lose her to the cruel lord as she did her sister Azelma years ago. But the laws of the Court of Miracles are strict, and Nina’s actions and thirst for revenge could set off a war between the guilds as they bring face to face not only with the various Masters, but also revolutionaries and Royalty.

I have read Les Miserables, but it was so long ago that I barely remember anything beyond the characters’ names, and it was more or less the same as not having read it at all. From what I do recollect though, The Court of Miracles has deviated way off the original, so it doesn’t make any difference at all. Oddly enough, this turn of events in history regarding the French Revolution is something I have given a bit of thought to and it was quite fascinating to see this book explore an imagining of how things may have ended up if the revolution went wrong. What I was really impressed with about this book was that I felt like I was reading a fantasy novel – yet it didn’t have a single element typical of fantasy, except perhaps the Ghosts, and could in fact be classified as something between a literary and historical reimagining.

When a synopsis says ‘for fans of XYZ book’, I rarely pay any attention, but when this claims ‘for fans of Six of Crows’, it’s absolutely right. The feel of the narrative is similar, even though it doesn’t have the same high stakes tension. Nina is definitely a skilled and daring cat burglar and is very cunning in worming her way into places to find information, but I thought that what exploits we do see of hers were rather underwhelming as they seem to be over much too soon. In contrast, her very first robbery when she steals the necklace right off the young Dauphin’s neck was far more exciting.

I did feel however, that the story seemed to drag in some places, and while the short stories were nice enough, I thought that they didn’t really add much to the narrative, since the meaning behind them, such as the tale about the mice and cats were already pretty well explained over the course of the story itself. This time could have been better utilized developing the Court of Miracles itself and the various guilds as the only one we get to see in any kind of detail is the Guild of Beggars. I’m particularly curious about the Guilds of Assassins and Letters since there are actually characters who play a rather significant role in the events of this book. The world-building could definitely use some work, along with the time jumps. It took me a while to figure out that there was a span of a few years between Nina joining the guild and Ettie coming into the story, and seeing as the bond between the two girls was built in that time, it was hard to connect to Ettie for a long time or completely understand Nina’s actions that follow.

Overall, The Court of Miracles was an interesting start to a new series and I’m interested to see what roles the Dauphin and St. Juste will play going forward as it’s clear that along with the upheaval that the Court is about to go through, the winds of revolution have not yet left Paris. While this is technically a retelling, I think it could appeal to fans of a variety of genres and I would definitely recommend it!

7 thoughts on “The Court of Miracles – Kester Grant”