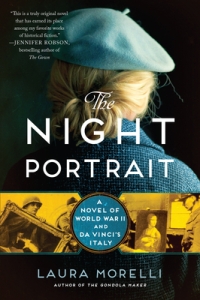 Synopsis: Milan, 1492: When a 16-year old beauty becomes the mistress of the Duke of Milan, she must fight for her place in the palace—and against those who want her out. Soon, she finds herself sitting before Leonardo da Vinci, who wants to ensure his own place in the ducal palace by painting his most ambitious portrait to date.

Munich, World War II: After a modest conservator unwittingly places a priceless Italian Renaissance portrait into the hands of a high-ranking Nazi leader, she risks her life to recover it, working with an American soldier, part of the famed Monuments Men team, to get it back.

Two women, separated by 500 years, are swept up in the tide of history as one painting stands at the center of their quests for their own destinies.

Review:
Thank you to Harper Collins Canada and HCC Frenzy for providing me with an ARC of this book in exchange for an honest review.

The year is 1492, and Leonardo Da Vinci makes his way to Milan in hope of seeking the patronage of the Duke Ludovico Sforza and pursue his passion of building great machines and inventions. Yet, in the Milanese court, it is his skill at painting that will help him survive as he is commissioned to paint the Duke’s young mistress, Cecilia Gallerani. Cecilia and Leonardo strike up a friendship, and as Cecilia struggles to maintain her position in the palace, the portrait begins to take shape. Hundreds of years later, that very portrait, better known as the Lady with an Ermine, is now a priceless artifact, and during the mass appropriations of artworks and treasures from across Europe, lands in the possession of a high-ranking Nazi officer. Edith Becker, an art conservator from Munich, is horrified at what she has unwittingly enabled, resolves to save it, along with countless other treasures she assesses and catalogs daily, risking her life to do so by working with Dominic, an American soldier of the Monuments Men.

Historical fiction novels with dual timelines are fast becoming a favourite narration style for me. There have been so many amazing novels this year told in this fashion, and this one in particular, hinging on a single painting that causes the most unlikeliest people to cross paths in a time of war, was a truly fascinating tale to read. I know very little about art, but this painting is actually one I’ve come across previously when researching Da Vinci. The good thing though, is that while so much of this book is centred around the creation and journey of one painting, it is possible to know nothing on the subject and still enjoy it.

The Monuments Men are something I was somewhat familiar with, and it was interesting to see their workings through the eyes of a soldier charged to protect these officers and the priceless treasures they safeguarded. Dominic’s tale added depth to an area of WWII history that I know comparatively much less about, and was a great addition to this story. 15th century Milan was no less captivating, and I would have loved for the story to spend more time in Renaissance Italy. I felt more connected to the WWII timeline to be honest, and Edith and Dominic’s journeys were admittedly the more action-packed storylines. Milan in the late 1400s is described in rich detail and it was wonderful to experience through the perspective of Leonardo and Cecilia but somehow, it felt like I was seeing it through a lens rather than the immersive experience historical fiction usually is for me.

The Night Portrait was quite different from most WWII books I’ve read – perhaps lighter wouldn’t be the most accurate word, but much of the events in this book are from the perspective of people not on the front lines. As a result, the story manages to convey the horrors of war, but does so without the narrative being as emotionally weighty as such books can tend to be. I was a little disappointed to not find an Author’s Note at the end of this book, since I was quite curious to learn about the no doubt extensive research that must have gone into this book, but I found myself learning so many new facts with this book, which really is one of the best parts about historical fiction. It was nice that this was one of the rare few WWII stories that end on a happier note – in both timelines. Fans of historical fiction are sure to enjoy this book, and I would highly recommend it!