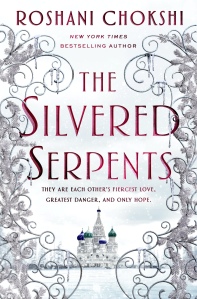 Synopsis: Séverin and his team members might have successfully thwarted the Fallen House, but victory came at a terrible cost — one that still haunts all of them. Desperate to make amends, Séverin pursues a dangerous lead to find a long lost artifact rumored to grant its possessor the power of God.

Their hunt lures them far from Paris, and into the icy heart of Russia where crystalline ice animals stalk forgotten mansions, broken goddesses carry deadly secrets, and a string of unsolved murders makes the crew question whether an ancient myth is a myth after all.

As hidden secrets come to the light and the ghosts of the past catch up to them, the crew will discover new dimensions of themselves. But what they find out may lead them down paths they never imagined.

A tale of love and betrayal as the crew risks their lives for one last job.

Review:
Thank you to the publisher, Wednesday Books, and Edelweiss for providing me with an eARC of this book in exchange for an honest review.

“What he had done had not looked like love.
But then again, love did not always wear a face of beauty.”

The Fallen House was successfully thwarted in the catacombs of Paris, but the terrible events that followed still haunts Séverin and his crew. Tristan’s death has hit all of them hard, and they have mostly gone their separate ways. Desperate to put things right, Séverin gathers them together for one last job – to find the legendary Sleeping Palace where the lost treasures of the Fallen House are rumoured to be hidden, and with it, a tome known as The Divine Lyrics which supposedly grants it’s owner the power of God. But as their hunt leads them out of Paris and into the icy expanse of Siberia, they must face not only the deadly obstacles and traps laid by their enemies, but also the demons of their own pasts in this sequel where the stakes are higher than ever.

I think I’ve been sitting on this ARC for over 10 months now, which has been quite the task. It’s really annoying that what should have been a February release got pushed back all the way to September, because I’d forgotten most of the story. Word of advice – reread The Gilded Wolves before starting on this, or atleast one of the many recaps available online. This book picks up where the previous one left off and expects the reader to be caught up on the story as it doesn’t spend too much time rehashing events that have already happened.

After the roller coaster that was The Gilded Wolves, I was expecting this to be good, but wow – that was more than anything I thought of. The writing and world-building is as stunning as ever, this time set in Russia, and the clues that lead our crew to a mysterious palace of ice. I loved how the Sleeping Palace was described, with its wonders, hidden dangers and long held secrets, and I could nearly visualize it. This book was much faster paced, considering it was more of a treasure hunt, yet perfectly balanced with some amazing character growth. Although they’ve all fallen into what seems to be a familiar rhythm of a job, there is so much more going on internally that each of them is dealing with.

“I wish, in war, there were no need for casualties.
And yet, no one is truly safe.
When the devil waged war in the heavens, even the angels had to fall.”

While the plot of this book is about finding the lost treasures and ultimately The Divine Lyrics, in some ways, it is even more about the journey our characters are making to get there. Each of them seeks the book for a different reason. Séverin hopes to set things right with the power of Godhood and protect his friends, whereas for Laila, the book is her last chance to escape her fast-approaching death.

The Silvered Serpents is significantly darker in both mood and dialogue, and the light-hearted banter of the first book is much diminished. Yet, Roshani Chokshi manages to insert witty repartee in all the right places to lift the mood of the story without detracting from the overarching grief and loss that is at the core of this book. It is truly one of the most realistic portrayals of grief I’ve come across. Each of the crew is dealing with it in different ways and this is the driving force behind their motivations and actions. Laila is attempting to reconcile herself with her imminent death, Enrique continues to struggle with his biracial identity and fitting in, Hypnos longs to belong in the group, Zofia deals with her sister’s poor health and her efforts to come out of her shell and a grieving and deeply haunted Séverin is being his worst brooding and secretive self, closing himself off from the others, and internalizing everything.

We already know from the ending of The Gilded Wolves that Séverin is not in fact the true heir to House Vanth, and the truth behind that was one huge reveal I was looking forward to. Let’s just say it was sufficiently shocking and then some and ok, I was expecting a cliffhanger, but did it really have to be that evil? The last couple of chapters completely blew me away and I do hope it won’t be another year and a half before I can get my hands on what promises to be a spectacular finale. The Silvered Serpents was a spectacular read and the strength of this story remains in its amazing characters, so much so that my attention was more on their arcs than the quest to find the artifact. This is one book I did not want to put down as I tried to piece together the delightfully intricate clues and twists. If you haven’t read this series yet, I highly recommend it, and this book especially, because this is what a sequel done right looks like!