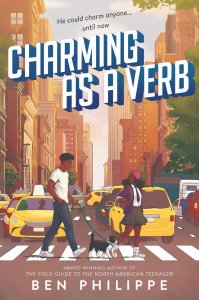 Synopsis: Henri “Halti” Haltiwanger can charm just about anyone. He is a star debater and popular student at the prestigious FATE academy, the dutiful first-generation Haitian son, and the trusted dog walker for his wealthy New York City neighbors. But his easy smiles mask a burning ambition to attend his dream college, Columbia University.

There is only one person who seems immune to Henri’s charms: his “intense” classmate and neighbor Corinne Troy. When she uncovers Henri’s less-than-honest dog-walking scheme, she blackmails him into helping her change her image at school. Henri agrees, seeing a potential upside for himself.

Soon what started as a mutual hustle turns into something more surprising than either of them ever bargained for. . . .

This is a sharply funny and insightful novel about the countless hustles we have to keep from doing the hardest thing: being ourselves.

Review:
Thank you to Harper Collins Canada and HCC Frenzy for providing me with an ARC of this book in exchange for an honest review.

Henri Haltiwanger is a popular, hard-working senior at a prestigious Manhattan high school who runs a dog walking business on the side. His one life-long ambition is to attend the ivy league university of his dreams, Columbia. However, his neighbour and classmate, Corinne Troy, has figured out that his so called business isn’t entirely legit. Corinne has her own troubles and is seen as ‘intense’ for her study habits and has a hard time fitting into the social scene. So in return for keeping Henri’s secret, she blackmails him into helping her socialize more and better her image at school. Henri, having no choice, agrees, but is surprised when he finds himself wanting to get to know her better as they begin to spend more and more time together.

I have to say that I was kind of disappointed with the author’s previous book, The Field Guide to the North American Teenager, but I did enjoy the writing style, and snarky humour of the main character, which is what motivated me to put this book on my TBR. It was definitely a good decision. Charming As A Verb was a much smoother narrative and the characters were better developed and easy to connect with. Though I didn’t go to high school in the US, the school I attended had a similar high stress and competitive academic environment with very focused educational tracks for certain college majors, so I can definitely relate to this book on some level. New York was a fantastic setting for this kind of book, and the atmosphere of fast paced city life fits perfectly.

Henri is by far the most relatable and genuine character I have come across in quite some time. The high school teen is portrayed in a very realistic manner – talented and hardworking, but under a tremendous amount of stress from his father who wants him to go to Columbia. He has some pretty misguided ideas, like his less than honest dog walking scheme, and makes some very dumb decisions, but understands his mistakes and learns from them. Henri’s voice is great fun to read, charming (which is exactly the image he wants to project) and funny, but also authentic, painting a portrait of a teen who wants to be a good son, to fulfill his family’s expectations which have become his own goal in life, but struggling to figure out what his own dream is and what he truly wants.

I was surprised at how much I ended up liking Corinne’s character (though Henri remains my favourite). Corinne was exactly what Henri needed – she sees right through his charming persona to the heart of his struggle and shows him that the path he is trying to follow is not the only one available to him. She is quite outspoken, and lack of social graces aside, a very strong character who is not afraid to be herself, something that Henri begins to learn.

While it is majorly focused on the stress and uncertainty surrounding college admissions decisions, Charming As A Verb also highlights through Henri the additional challenges he faces compared to his wealthier classmates due to his family’s socioeconomic struggle and his status as a scholarship student and the child of immigrants. I thought it was very good that the book acknowledged this, and portrayed accurately just how much effect and stress all of this had on Henri.

Charming As A Verb is a cute contemporary novel that is super relatable, not only for teens who are heading into this part of their education, but also for those who have been through this uncertain stage. This was a fast paced novel, easy to finish in one sitting, and I really enjoyed it. I would definitely recommend this as a must read for this fall.

Do you plan to read this book? Let me know in the comments below!
Any quotes in this review were taken from an advance reader’s edition and may differ from the final version of the book.

10 thoughts on “ARC Review: Charming As A Verb – Ben Philippe”