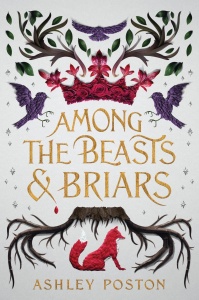 Synopsis: Cerys is safe in the kingdom of Aloriya.

Here there are no droughts, disease, or famine, and peace is everlasting. It has been this way for hundreds of years, since the first king made a bargain with the Lady who ruled the forest that borders the kingdom. But as Aloriya prospered, the woods grew dark, cursed, and forbidden. Cerys knows this all too well: when she was young, she barely escaped as the woods killed her friends and her mother. Now Cerys carries a small bit of the curse—the magic—in her blood, a reminder of the day she lost everything. The most danger she faces now, as a gardener’s daughter, is the annoying fox who stalks the royal gardens and won’t leave her alone.

As a new queen is crowned, however, things long hidden in the woods descend on the kingdom itself. Cerys is forced on the run, her only companions the small fox from the garden, a strange and powerful bear, and the magic in her veins. It’s up to her to find the legendary Lady of the Wilds and beg for a way to save her home. But the road is darker and more dangerous than she knows, and as secrets from the past are uncovered amid the teeth and roots of the forest, it’s going to take everything she has just to survive.

Review:
Thank you to the publisher, HarperTeen, and Edelweiss for providing me with an eARC of this book in exchange for an honest review.

“It is said that the first king of Aloriya was born with fire in his blood.”

The kingdom of Aloriya has long been kept safe from the dangers of the Wildwood by the bargain made by the first king with the legendary Lady of the Wilds. Everyone knows the dangers of the woods, especially Cerys, who barely escaped it as a child and still bears a reminder to this day – the magic in her blood. But as a new queen is about to be crowned, the monsters in the woods break free of the enchantment and descend on the coronation. With nowhere else to go, Cerys,the sole survivor, flees into the woods, accompanied only by her pet fox, determined to find the Lady of the Wilds and seek her help to reverse the curse upon those in the kingdom. But navigating the cursed forest is more dangerous than she ever realized and nothing is as it seems.

“It is said that the Lady of the Wilds gifted
King Sunder a glorious crown.
It is a lie.”

Among the Beasts and Briars has the feel of a fairytale retelling though it isn’t exactly one. If I had to pick, I would say certain elements of it reminded me a lot of The Shadow Queen in the Ravenspire series. This really is a beautiful cover, which was what caught my eye in the first place. I was also quite curious to see what Ashley Poston would come up with in the fantasy genre, considering Geekerella has been a favourite of mine for several years now. The writing was pretty good and the narrative flowed smoothly and was easy to keep up with. The setting of the cursed forest was very good and gave a very ominous feel to the story. This is probably as close to a creepy read I’m ever going to get, so I’m going to stretch the definition and use this for one of my Halloween themed reading challenges this month – there are monsters after all!

This was definitely one of those books where I enjoyed the plot over the characters. The legend surrounding Aloriya and the Lady of the Wilds and of course, the curse that turns people into monsters were all so well thought out and I give this an A+ for both setting and world-building. We get to see little beyond Aloriya, the forest and the hidden city within, but with the pace of the story, there wasn’t really time to wonder about other kingdoms at all. I also really appreciated the short chapters (the last book I read seemed to have absolutely interminable chapters and all I wanted was to finish the chapter so I could get a snack), and the alternating POVs made for a very engaging read.

However, I didn’t like this as much as I thought I would. I just feel like I was expecting more of an epic adventure than it turned out to be. I don’t know if it’s just me, but I found this book to be rather predictable overall – either that, or I’ve just been reading too many fairytale retellings that little surprises me in this genre anymore. I literally figured out one big plot point from Cerys’ very first flashback that we see. But a large part of why this book didn’t work for me was Cerys. It’s nice that she’s a rather average girl (magic aside) and doesn’t suddenly gain extraordinary abilities, but maintains her determination to save her loved ones throughout. But her behaviour is extremely reckless considering she’s travelling in a cursed forest what with her running off to investigate every scream she hears. I also thought it was really unfair of her to be holding Fox to such high standards considering the guy was a fox until a few days ago! Both Cerys and Fox felt rather immature to me, in both speech and actions. The setting is clearly somewhat medieval, yet there are places where the dialogue slips into phrases that are distinctly modern, and it is quite jarring.

Even though it felt a little abrupt considering the build-up, I liked the way this ended, tying up the loose ends of this story, but still leaving enough scope for a spin-off in the future. Those bonus scenes at the end were quite unexpected, yet a great addition, particularly Seren’s. Overall, this was an entertaining, fast-paced read, easy to get through in one sitting, and if you’re in the mood for a fairytale-esque magical adventure, this would be a great pick!

Among the Beasts and Briars releases on October 20th, 2020.

Do you plan to read this book? Let me know in the comments below!
All quotes in this review were taken from an advance reader’s edition and may differ from the final version of the book.