A German soldier risks his life to drop off the sought-after Enigma Machine to British Intelligence, hiding it in a pub in a small town in northeast Scotland, and unwittingly bringing together four very different people who decide to keep it to themselves. Louisa Adair, a young teen girl hired to look after the pub owner’s elderly, German-born aunt, Jane Warner, finds it but doesn’t report it. Flight-Lieutenant Jamie Beaufort-Stuart intercepts a signal but can’t figure it out. Ellen McEwen, volunteer at the local airfield, acts as the go-between and messenger, after Louisa involves Jane in translating. The planes under Jamie’s command seem charmed, as Jamie knows where exactly to go, while other squadrons suffer, and the four are loathe to give up the machine, even after Elisabeth Lind from British Intelligence arrives, even after the Germans start bombing the tiny town…

The Code Name Verity series has been on my radar for a very long time, and I’m glad I was finally able to get to it, even if I did end up reading the last book first. The Enigma Game was not as emotional as some other WWII novels I’ve come across this year, but it is certainly a thought-provoking and insightful read.
Check out my review here! 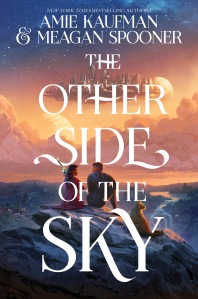 Prince North’s home is in the sky, in a gleaming city held aloft by intricate engines powered by technology. Nimh is the living goddess of her people on the surface, responsible for providing answers, direction—hope.

Linked by a terrifying prophecy and caught between duty and fate, they must choose between saving their people or succumbing to the bond that is forbidden between them.

Magnetic and gorgeously thematic, New York Times bestselling author duo Amie Kaufman and Meagan Spooner have crafted a gripping tale of magic and logic, fate and choice, and an impossible decision between an empty future and a deadly love. Perfect for fans of Claudia Gray and Laini Taylor.

France, 1714: in a moment of desperation, a young woman makes a Faustian bargain to live forever and is cursed to be forgotten by everyone she meets.

Thus begins the extraordinary life of Addie LaRue, and a dazzling adventure that will play out across centuries and continents, across history and art, as a young woman learns how far she will go to leave her mark on the world.

But everything changes when, after nearly 300 years, Addie stumbles across a young man in a hidden bookstore and he remembers her name.